As Austria’s second largest city with over 320,000 inhabitants and the capital of the region of Styria, Graz is well-known for its smart city innovation. Graz was included in the list of World Cultural Heritage Sites in 1999 (Historic Centre) and 2010 (Eggenberg Castle). In 2003, it was Cultural Capital of Europe. In 2008, it was named City of Culinary Delights and became in 2011 one of UNESCO’s “Cities of Design”. Graz has several universities with a combined population of about 60,000 students.

The comprehensive 2 ½-day programme was prepared with three pre-defined areas of cooperation:

SLF is an innovator in energy and environmental technologies. The company representative provided an overview of the history and current developments. Established in 1993, SFL has evolved from a locksmith business to a sustainable industrial company. Now, SFL offers green solutions to construction projects (plant, facade and steel), technology (lighting, energy and glass) and mechanical engineering. SFL is involved in prestigious projects all over the world, including Germany, Switzerland and the US. In Graz, the company built the Railway Hub, the Museum of Modern Art and the Science Tower.

Recently, SFL became a leader in e-mobility by designing and building the ELI, a 1-ton electric utility vehicle. The ELI is 100 per cent emission-free, compact and its use can be individually tailored according to clients’ needs, such in transport, city maintenance or within large-scale companies. Members of the Ekurhuleni delegation were impressed by the various applications of the ELI and may seek ways to innovate in their local context. (www.sfl-technologies.com/en/)

As an Austrian solar engineering company, SOLID specializes in all aspects of large-scale solar thermal energy plants. In business for over 25 years, SOLID has been designing, building and operating such plants around the world. These are aimed at providing hot water, room heating, industrial process heat and district heating for towns and villages. SOLID also concentrates on solar chilled water plants, among these the largest commercial solar cooling plants currently in operation.

This innovative application caught the interest of the visiting delegation since Ekurhuleni has a high amount of sunshine, especially during the cold winter months. Within the European project Solar District Heating (SDH), SOLID has partnered with the energy utility Energie Steiermark and developed a mega solar plant with seasonal storage and absorption heat pump for feeding into the district heat grid. Located in Graz, it is the largest plant of its kind in the world and sets standards to be replicated elsewhere. (www.solid.at/en/)

The morning of day 2 of the visit focused on the strategy and implementation of Smart City Graz, with specific sessions on spatial development, integrated city development, district heating to reduce air pollution, and innovative mobility projects. The visit highlighted the general objectives for the Vision for Graz 2050:

–          Environmental-friendly approach should be achieved by implementing sustainable concepts for energy consumption, mobility and others.

A multi-department series of presentations provided the delegates with insights into the strategic vision for Graz, and to the implementation thereof in the coming decades. The presenters described how Graz is focusing on intensifying land use in already built environments and developing brownfield areas. The city is working with interdisciplinary teams with expertise in urban, landscape or mobility planning. These teams are connected to non-technical partners representing government departments and local actors.

In addition, the team heard how the management is tied to the district level, where regular participation workshops are organized. Smart City Graz defines itself as integrated urban planning that includes sectors such as energy, mobility, ecology, buildings, economy, and supply & disposal. Central to this is fostering of green innovation while creating awareness, acceptance and behavioural changes among the public. The “vor.ort“ (“On site”) district management office and café was opened in 2014 to engage the public & businesses. (www.smartcitygraz.at)

This comprehensive information fuelled discussions among the delegation, and the follow-up possibilities in this regard are in discussion.

The City of Graz lies in a valley and is surrounded by mountains (“basin situation”), a geographical reality causing severe air pollution, especially during the winter months. District Heating (DH) has become a major factor for Graz to lower emissions while providing a heating solution for the city. In recent years, a DH energy mix combining biomass, waste heat and solar energy has been developed to gradually replace conventional heat sources in the future. Currently, DH provides around 25% of the energy supply – which may increase to 50% by 2025. One flagship project (co-developed by SOLID GmbH) is a large scale solar thermal system that includes seasonal storages and heat pumps, earmarked to supply 20% of the annual heating needs. The investment for the plant was less than 200 Million Euro and the City of Graz is avoiding 50,000 t of CO2 per year. (www.solar-district-heating.eu)

One of the interesting insights from the Ekurhuleni delegate is that is would be difficult to motivate for this in South Africa as coal is too cheap, as compared to other technologies and fuels.

“Graz Linien” (under the city-owned “Holding Graz”) is the largest mobility provider in southern Austria. It transports about 115 million people a year, equally divided on buses and trams. Graz is a pioneer in the use of bio diesel, which was introduced on its buses about 20 years ago. Electrical buses are currently being tested. Public transport in the city makes up 20% of all transport – with a political goal to increase it to 24%.

Currently, Graz Linien plans is expanding their operation to a multimodal mobility service called “TIM” that will combine the existing public transport services with e-car sharing & rental, e-taxis and bicycles. TIM, which stands for “daily. intelligent. mobile”, is supported by the Austrian Federal Ministry of Transport and prides itself on being clean, modern and sustainable. The visiting guests asked pertinent questions about various mobility concepts since South Africa is known for its underdeveloped public transport. (www.holding-graz.at)

Ekurhuleni’s large commuter population pose ongoing developmental and infrastructural challenges to the city government. The delegation was able to reflect on the innovation. Here too seeking collaboration remains part of the ongoing exchange.

The afternoon continued with a site visit to the first Smart City Pilot Project of Graz: the Area Waagner Biro. The 49-hectare area used to be an industrial and commercial brownfield site next to the main train station. Now, it is the demo site of the 330 million Euro “Smart City Project Graz”, aimed at developing a modern mixed-use and energy self-sufficient suburb for close to 4,000 people. Initiatives include green residential buildings, a new tramway line, public park areas and the Science Tower. The latter, a 60 metres-high urban landmark, impressed the visitors from South Africa. It uses transparent energy glasses that convert light into electrical energy (energy glass photovoltaics) – a first in the world.

The Science Tower was designed by SFL Technologies and is utilized as a research facility for urban and green technologies. Graz Waagner-Biro is the first realization of a local energy network in Austria aimed at energy autonomy. Part of it is also the Intermodal Transport Hub. (www.smartcitygraz.at)

The Green Tech Cluster is the heart of the Green Tech Valley and is home to over 200 companies and research institutions. It explores and develops green cutting-edge innovation. The region of Styria hosts 20 global technology leaders, with technical expertise in bioenergy, solar energy, waste and resource management and green buildings. The bi-annual Green Tech Innovators Club was held at the Technical University of Graz, scheduled to coincide with the visit of the delegation from South Africa.

Jarod Lyons was invited to present on Green Cape, Cape Town (www.greencape.co.za). Green Cape is a non-profit organization, established by the Western Cape provincial government in 2010, that facilitates the widespread inclusion of cost-effective green economy solutions in the province. The organization works with businesses, investors, academia and government to help unlock investment and employment potential in green technologies. Currently, collaboration between Green Cape and Green Tech Cluster Styria is explored (www.greentech.at/en/).

Day 3 featured a meeting at the Graz City Hall and site visits to the Graz Recycling Centre (www.holding-graz.at/abfall/) and the Merkur Eisstadion Graz-Liebenau (www.mcg.at/merkureisstadion/merkur-eisstadion.php). At the City Hall, the ECOPROFIT initiative was introduced, a corporative approach between authorities and companies to reduce the environmental footprint while saving costs. The overall goal of ECOPROFIT (Ecological Project for Integrated Environmental Protection), introduced in Graz in the early 1990s and implemented in many countries all over the world, is sustainable economic development. ECOPROFIT operates through workshops, consultation and certification. (www.cpc.at)

The Eisstadium, home of the Graz99ers ice hockey team, uses green technology to maintain adequate ice levels. At the modern recycling centre, the public can dispose old electronic devises, packaging material, rubble, garden refuse, and bulk refuse, among others. The Graz Recycling Centre has been developed according to the latest standards in waste management. Throughout the visit delegation from South Africa had the opportunity to test the public transport system, including a city tour on Segways, the two-wheeled, self-balancing scooter – which is known in South Africa for its common use in large shopping malls.

The delegation of Ekurhuleni returned to South Africa with many positive impressions, and are exploring possible collaboration with Graz in the areas of Smart City, mobility, and spatial planning. It is expected that within three month a memorandum of understanding between the two cities will be agreed upon.

Throughout the visit, the delegation from South Africa had the opportunity to test the public transport system, including a city tour on Segway, the two-wheeled, self-balancing scooter – which is known in South Africa for its common use in large shopping malls.

The delegation of Ekurhuleni returned to South Africa with many positive impressions and are exploring possible collaboration with Graz in the areas of Smart City, mobility, and spatial planning. It is expected that within three month a memorandum of understanding between the two cities will be agreed. 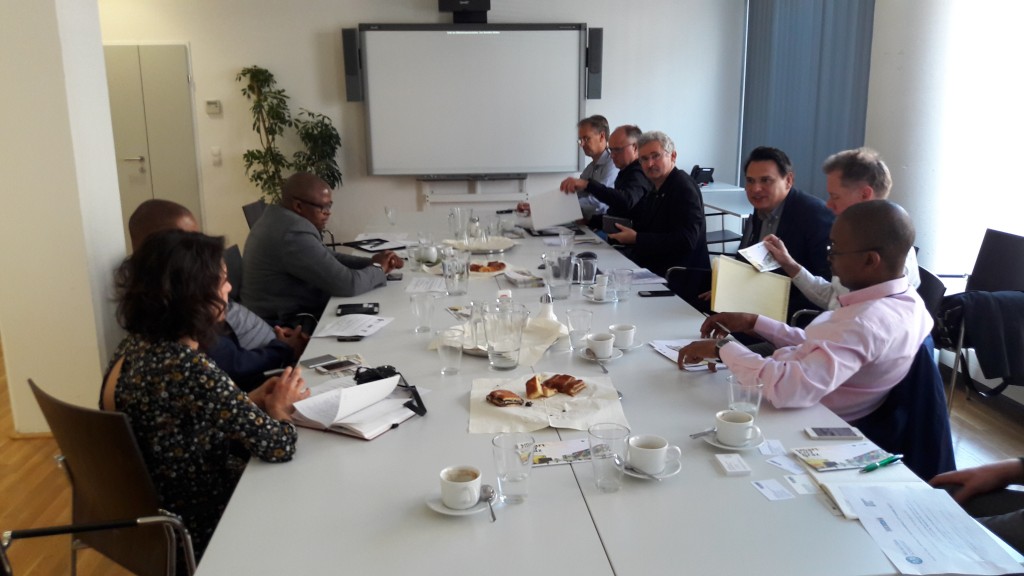 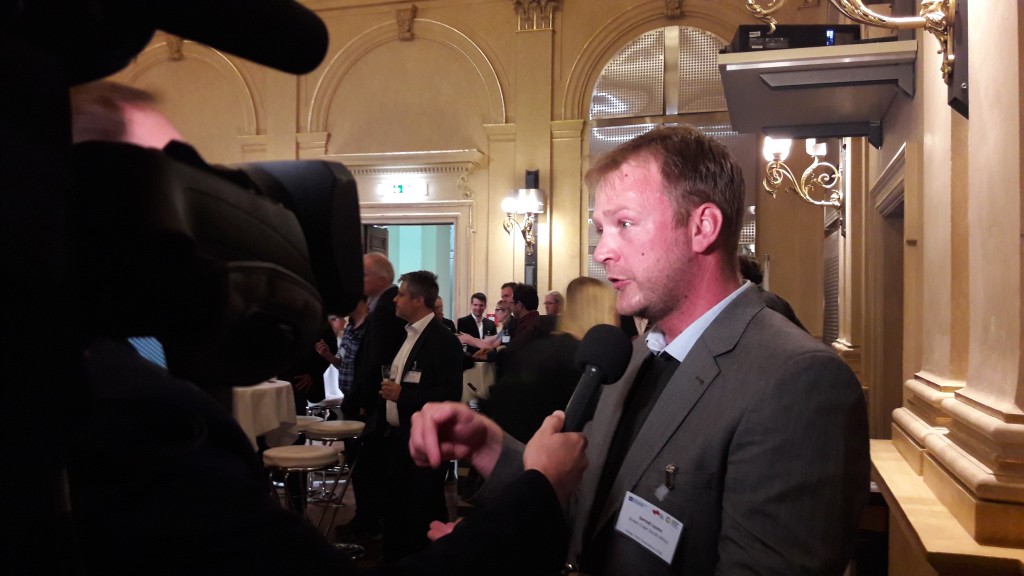 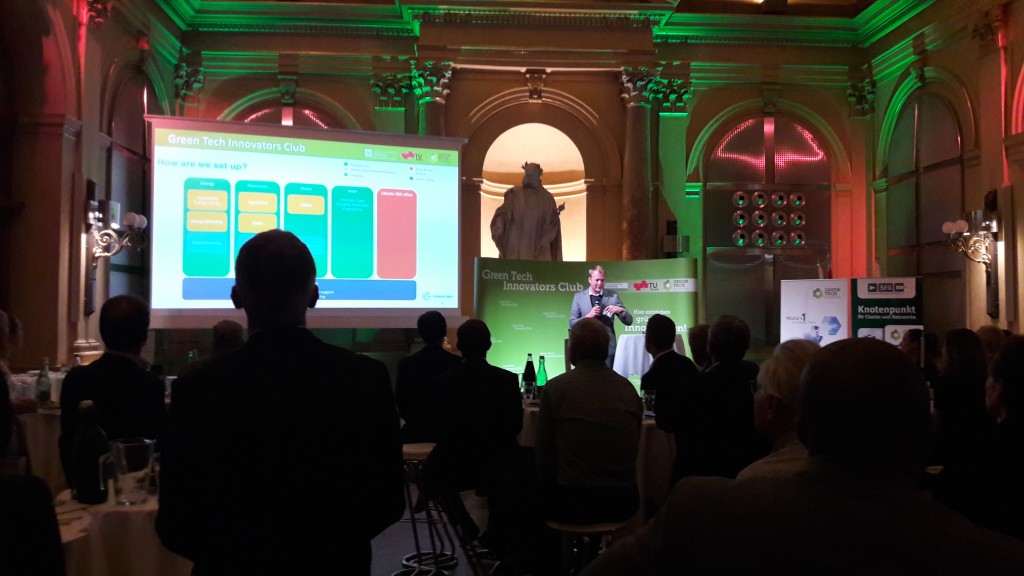 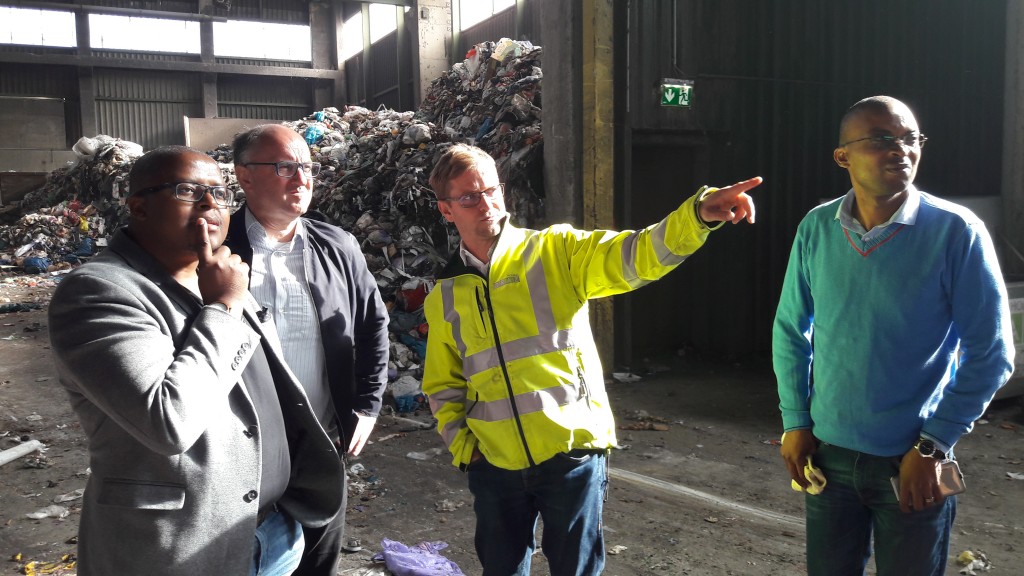 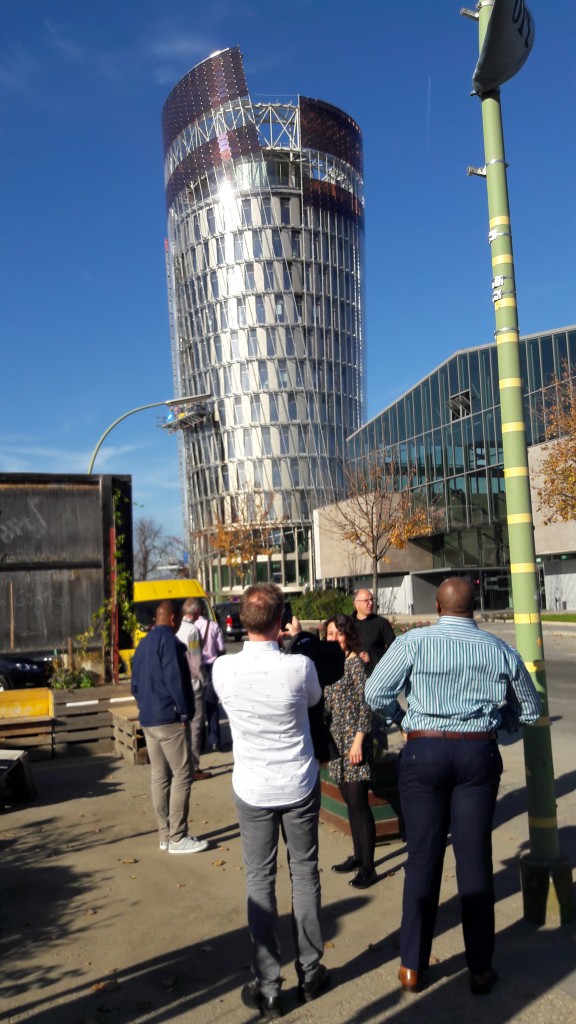 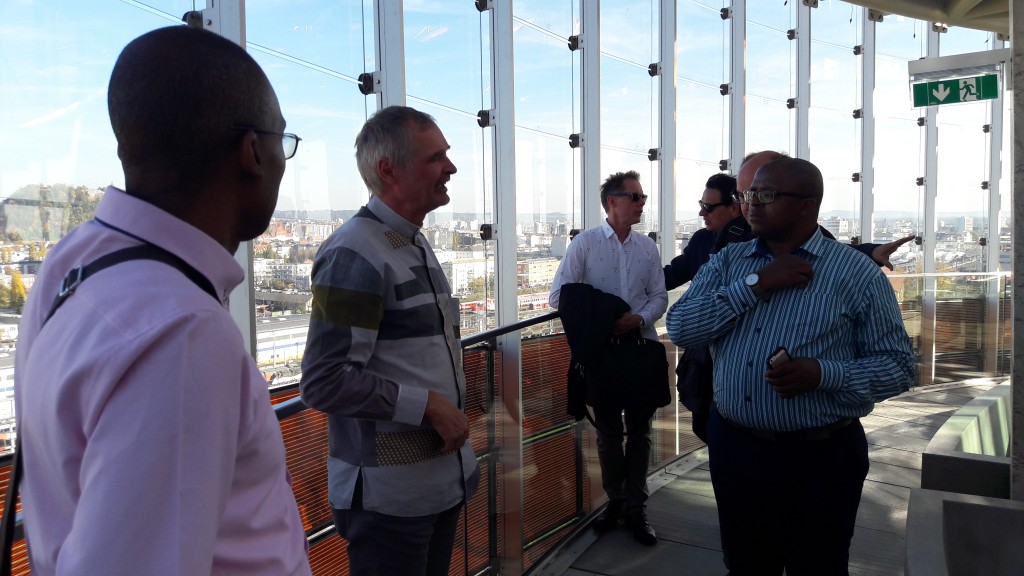