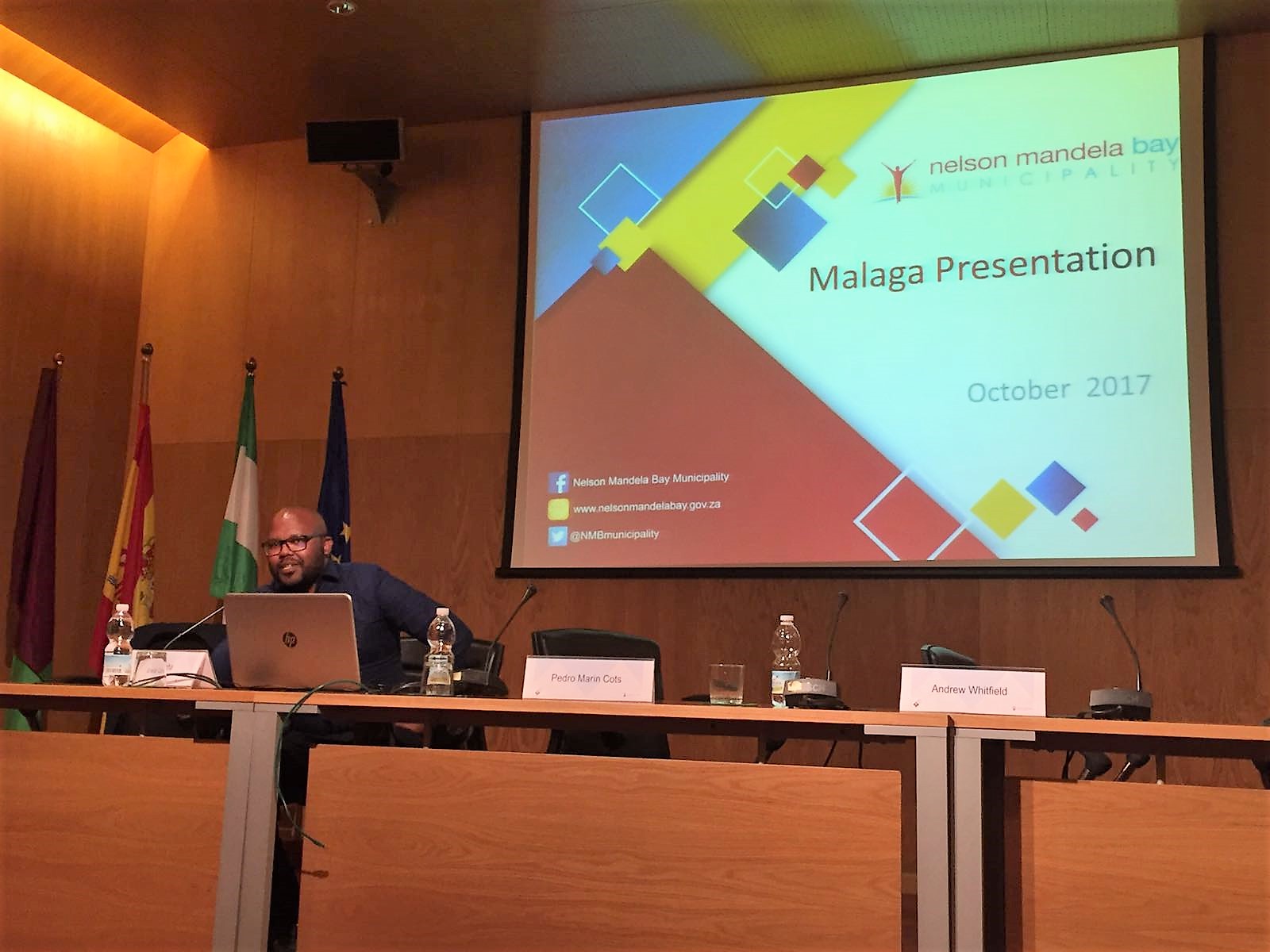 This report has been drafted by the delegation from NMB.

The programme had to be modified as two members of the delegation had problems with their visas and the third had to cancel due to ill health. Most of the meetings were still achieved although in a different sequence. As the NMB representative was there for the full program time, we benefitted on day 1 from a detailed city visit to the urban renewal programmes, historic centre transformation, Picasso Museums and visit to the Pompidou Centre.

Malaga’s strategies for achieving urban development and innovation are rooted in making the city more attractive and making the city SMART. These are defined by the following sectors:

The information gleaned through presentations, meetings, discussions and site visits have been organised according to thematic areas and have been captured as such rather than direct minutes of the various meetings.

Malaga’s geographic location has made it a privileged city for a number of reasons. Nature has been very generous with this corner of Europe. The mountains that surround it have lush vegetation and natural parks. Acting like a protective screen, they provide Malaga with a microclimate with 3000 hours of sunlight per year. This, along with the quality of its beaches makes it one of the most popular tourist destinations. This was not always the case. Carefully thought through strategies to brand and market the assets, in order to maximise on its tourist potential, were required.

With more than 3000 years of history of Phoenicians, Romans and Arabs, it has become a cultural destination of note. This coupled with being the birthplace of Picasso and an approach to maximising the 30 museums and cultural institutions to contribute to the economy, adds to the cultural tourism offering. There are 2 Picasso museums as well as a franchise of the Pompidou Centre in Paris, which attract thousands of feet[KSG2]  per day. Recently an old produce store has been transformed by the city into a Contemporary Cultural Museum of note. Hundreds of thousands of visitors flock to these cultural museums each year.

The Roman Theatre, The Alcazaba and Gibralfaro Castel constitute a very well preserved archaeological site. The historical botanical gardens and natural parks are very popular with both locals and tourists. There is a high variety of cuisines with local production from the sea and mountains anchovies, clams sardines skewers, suckling kid, sausages, cheeses, wines and beers. Local markets offer these products in abundance. This coupled with the sun and 15 urban beaches, within almost a walking distance of the city centre, keep the city busy until very late at night. Restaurants are still busy at midnight in certain areas. Quality, accessibility and security are guaranteed.

The Malaga Urban Agenda was updated in 2015. It promotes the strategic objectives of Spain and the European Commission. It is the strategic reference framework for Malaga from both a medium (2020) to long-term perspective (2050). It is linked to the EC’s concept of integrated urban development that works towards a durable improvement in the field of economic, environmental, climate and social conditions of urban areas.

In order to meet its objectives, Malaga has established an observatory, which works with different aspects of sustainable development. Its main objective is to provide a meeting place for the exchange of information and experiences, providing a space for reflection and open dialogue, not only for the members, but also for anyone that could be interested in sustainable development.

The focus of the Observatory is on:

The City of Malaga has been collaborating for a long time, through the observatory, with Spanish, European, American and African cities within an urban development framework. The Observatory has coordinated working systems related to strategic planning, together with the development of the Urban Agenda 21 and specific projects associated with the improvement of the environment.

Malaga participates in an enormous network of cities including:

The Malaga Observatory has established several international partnerships in Europe and overseas.

Urban renewal took place from 2004 – 2009 and concentrated on pedestrianizing the main street and secondary streets and squares, while creating alternative vehicular routes and public parking on the circumference. This was done at a cost of approximately 50 million Euros and heavily subsidised by the European Union. Business owners were very reticent in the beginning but once the upgrade was completed, business improved dramatically.

A parallel integrated, operational programme focussing on environmental management was undertaken. This included:

Upgrade of the heritage areas

In 1995, Malaga’s inner city was faced with a decreasing and aging population, social degradation and vulnerability. There was a decline in the economy of the city with single function tertiary & commercial use. The mixed-use nature of the classic city was non-existent. This sparked an intervention by the city to reactivate the inner historic core. The interventions aimed at improving the urban environment, recovering degraded spaces through physical, environmental improvements & energy efficiency actions, economic development and the promotion of social cohesion through integration and equity. This included aspects such as:

Malaga has been a working port ever since Phoenician cargo vessels docked in the deep harbour 3,000 years ago. As part of its renewal, the city decided to move the giant container ships and oil barges of contemporary commerce outside the old harbour to make room for waterfront development that focuses on a new cruise terminal and a pedestrian-friendly seaport. The Palmeral, a broad walkway lined with hundreds of palm trees and trader kiosks, is the showpiece of the project.

The harbour front known as the Palmeral de las Sorpresas – the Palm Garden of Surprises – is a stunning transformation of a grungy working port into a well-loved walkway utilised by local people and tourists alike.

The Palmeral was followed by the opening of Muelle Uno, a wharf that doglegs off the walkway and stretches out into the harbour to La Farola, the 1816 lighthouse that still guides sailors into port. Harbour excursion boats, shops, bars, and restaurants run its entire length. As part of the waterfront’s transformation, the first branch of Paris’s Pompidou contemporary art museum outside France has been constructed. It is located in a giant glass box and has been a huge vote of confidence in Malaga’s renewal.

The development of Malaga Waterfront Development has many similarities with that of Nelson Mandela Bay. Originally, it took 30 years of negotiation and planning before actual implementation. The Port Authority and City did not agree on many aspects and the City experienced delays and frustrations in the lack of delivery. The impetus for commencement was with the citizens of Malaga who lobbied and pressured and eventually consensus was reached. One of the first steps was to remove the security fence and make the port accessible to pedestrians.

The concept of “Malaga Smart City” has been introduced as a more recent strategic pillar. The use of ICT and innovation has been introduced into almost all of the public services to improve management, reduce costs and generate value for citizens. The citizens are the central focus and the drive is for efficiency and cost saving for the city.

By capturing data and intelligence on the city, they have started incorporating technology on the management of services including waste management, transport management, smart grids, water management, the traffic control centre and the emergency centre. An example of this is the Traffic Control Centre, which is a facility that allows observation of the real-time traffic and control points that have higher traffic problems. The system consists of 47 cameras located at sites with higher traffic volumes. Through the information provided, it is possible to reduce travel times and waiting at intersections and preventing the formation of traffic jams. The system encourages road safety and provides information to the users. Citizens can at all times access information as to where the traffic pressure areas are in the city.

Information and Communication Technologies are used to share the details of governance in an open and transparent manner and build up a real connection making transport cleaner and more efficient. Electric cars have been piloted in the City.

The aspect of green building was presented. However, time pressures did not present sufficient opportunities to engage with the green projects. It would be of interest to have further inputs from the Malaga team on this aspect.

The University of Malaga is very dynamic and innovative. It has a strong concern for employability, which results in an effective link with the business sector, the Technological Park of Malaga and the Public Administration, in order to ensure that it develops a knowledge society that can find jobs.

The Technological Park of Malaga, which is on university grounds, is high quality business area, for innovative environmental friendly companies involved in manufacturing, advanced services, research and innovation. It extends over more than 200 hectares of land. More than 14,500 people of 590 companies, whose gross turnover amounts to 1.652 million of euros, work in the Park.

Malaga also has an office “Open for Business Malaga”, which aims at improving the destination marketing in all areas. Its purpose is to attract international investments, help the internationalization of the local companies and support the economic development of the City.

There were a number of lessons learnt:

The exchange with Malaga was a very productive and inspiring engagement. The many similarities with the City, the approach of putting Citizens at the forefront of planning and decision making, the opportunity to work in a SMART TECHNOLOGICAL and GREEN way, through the triple/quadruple Helix and in Clusters has been an eye opener. The forthcoming engagement with Malaga as part of the final meeting in May 2018 will provide a clear way forward with the expectation that a MOU on tangible cooperation between the two Cities can be signed. The MBDA is thankful to the EU, GIZ and Malaga City for its support to the programme and the warm hospitality extended to the delegation.