Mumbai 25 May 2015:  Three Indian cities- Mumbai, Navi Mumbai and Chandigarh are being paired with three European cities (Copenhagen-Denmark, Stuttgart-Germany, Lazio Region-Italy) under the new World Cities project, a European Union (EU) initiative which originated in the European Parliament, with the aim of promoting long-term working relations between cities of the EU and non-EU partner countries, including India. The project is implemented in India in partnership with Mumbai First.

The overall aim of the project is to contribute to better urban policy for the improvement of quality of life in participating cities across the world. The specific cooperation agenda with India foresees the identification of pilot regions and cities and the development of concrete actions, for implementation in the short-term, in areas including urban innovation (the smart city) and green technologies (energy efficiency, low carbon development). Actions are designed to increase so-called ‘triple-helix cooperation’ between governments, research and business.  World Cities will also strengthen market opportunities and job creation while pursuing the sustainable economic development of the cities involved, thus fostering win-win cooperation.

The initiative was launched at the Conference on Sustainable Urbanisation & World Cities – which has been organised as part of the partnership between the EU, Mumbai First and Mumbai’s planning agencies – held in Mumbai today in the presence of 15 European city delegates and senior officials of the State government and civic authorities from Mumbai including Mr S Kshatriya, Chief Secretary, Government of Maharashtra, Mr UPS Madan, MMRDA Commissioner, and Mr A Mehta, Municipal Commissioner.  The EU was represented by  HE the EU Ambassador to India, Dr Joao Cravinho and Dr W Deffaa, Director General, EU DG for Regional and Urban Policy, Brussels, besides other senior officials and EU experts.

Mr. Deffaa Director General, EU DG for Regional and Urban Policy, said, “In both India and the EU, we realise that that our policies for economic and social development will be successful only if they are successful in our cities. This is why it is important that we share our knowledge and experience on urban policy, and our examples of good practice in fields such as urban transport, energy efficiency, urban-rural relations and good urban governance. EU regional and urban policy invests over 50 billion euros annually in supporting European regions and cities and we, on our side, are keen to share the results of this experience. Our aim is to build a long-term cooperation platform between the EU and India in an effort to address more effectively the major urbanisation challenges of the 21st century.”

H. E. Dr João Cravinho, Ambassador of the European Union, thanked the Government of Maharashtra and Mumbai First for their support and shared the desire to continue building a genuine partnership on sustainable urbanisation between Indian institutions and the EU. “Urbanization is emerging as a global issue including India. The challenges on water, waste, energy and mobility need to be addressed with appropriate policies, planning, governance and infrastructure – in that order. These are some of the areas where Europe’s strength is undisputed. Europe has a lot to offer for India’s Smart City agenda and we are convinced that the European Union can be a unique partner for India. We believe that the World cities project can be a strong showcase of our joint actions,” he said.

This programme will also provide a unique opportunity to the three Indian cities to collaborate/learn from the experiences of China, Japan and Canada, who are the other country partners for the EU for the World Cities project.

The World Cities project will further strengthen the ‘Mumbai Partnership’ project – which was established between the European Union (EU), Mumbai First, government agencies and other stakeholders in order to address the challenges of urbanisation in Mumbai.

Mr. N. Nayar – Chairman, Mumbai First, expressed his deep appreciation for the excellent co-operation from the EU and mentioned that “The considerable experience of the European Cities will help Mumbai to restore its position as “Urbs Prima in Indis”

The day-long conference served to further strengthen the ties between EU and Mumbai institutions, examined the impact of the Mumbai Partnership, and helped develop the way forward for EU-India cooperation on sustainable urbanisation.

In the morning session 30-40 representatives from EU and Indian cities focused on the way forward regarding Mumbai’s Development Plan, waste management, wastewater management, and the development of business districts. The afternoon session was open to a larger audience of more than 100 persons. This session included a keynote speech by Mr. Pedro Ortiz, Senior Urban Planner on Concepts of Metropolitan Management & Planning Considerations about Mumbai, as well as panel discussions on Mumbai Metropolitan Region & Future Urban Planning and Business Opportunities for Smart Cities & Environmental Projects.

The speeches and presentations held during the kick-off conference are here.

About the Mumbai Partnership:

The Mumbai Partnership (MP) was established in 2013 to build a long-term cooperation platform between the European Union (EU), Mumbai First, government agencies and other stakeholders in order to address the challenges of urbanisation in Mumbai. The partnership encourages the exchange of best practices, examines the applicability of new policies, supports outreach activities, and promotes smart city development through conferences, working groups, and policy analysis.

The Mumbai Partnership launch event was the Conference on “The Challenges of Mumbai as a Mega-City – A Way forward with the EU” in November 2013. After extensive deliberations, it was decided to focus on the three key development issues of environment, energy/integrated transport and city planning through a series of separate working groups:

Overall, the Mumbai Partnership has achieved its objectives in relation to increased capacity and awareness, closer ties between the EU and Mumbai stakeholders, and outreach activities. It has enabled Indian participants and officials to have meaningful discussions with EU and other experts, examine new opportunities, and to develop the way forward for EU-India cooperation on sustainable urbanisation.

The World Cities project is the result of a political initiative in 2014 of the European Parliament and is implemented by the European Commission drawing on external expertise. Subject areas for cooperation under the project are selected based on the needs and priorities of Indian cities and EU cities expertise (e.g., development plan, waste management, water management, business development). EU and Indian sides will exchange information and discuss relevant urban planning issues during the period May 27-29. This will be followed by six months of decentralised cooperation on specific topics between the cities after which the EU will organise 5-day working meetings and site visits of the nominated Indian city delegates (3-5 delegates per city) with their EU counterparts in selected EU cities in November 2015. The concluding meeting will be held in India, with suggested prospects and take-aways for both India and EU in February 2016. 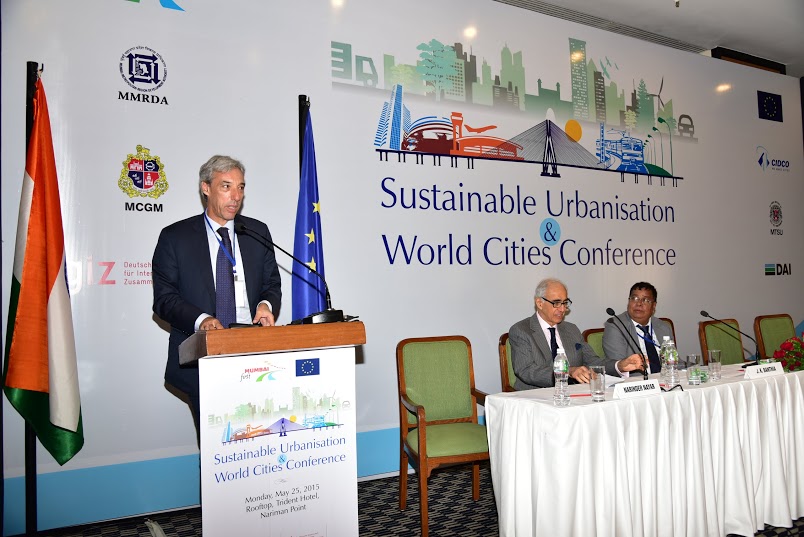 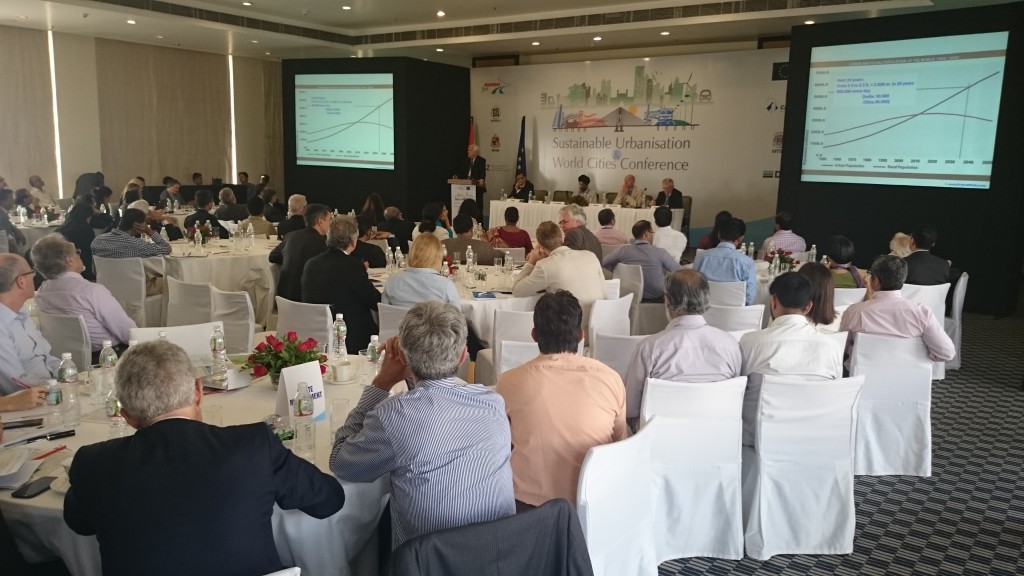 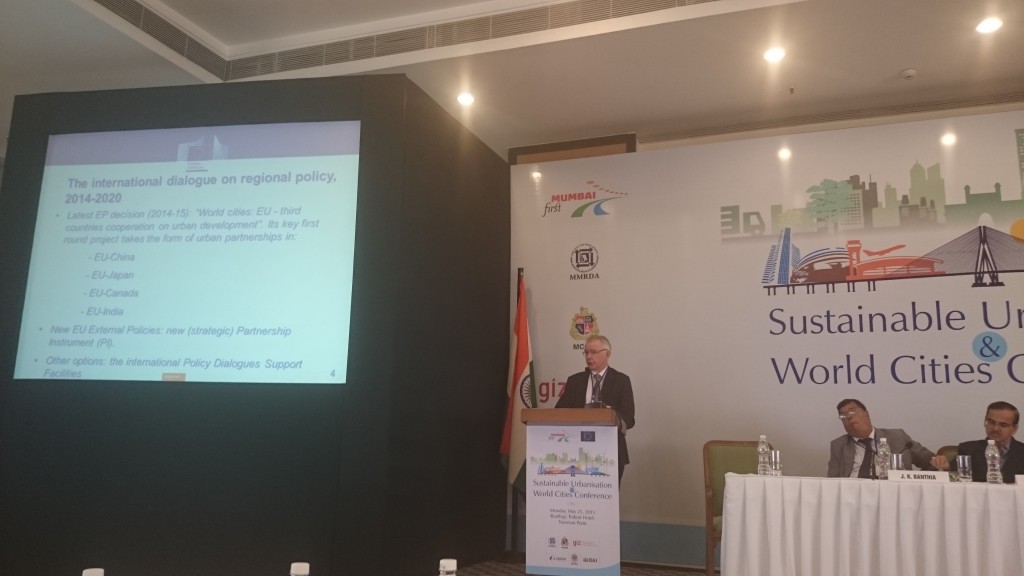