From 22 – 26 June 2015, the Standing Deputy Chairman of NDRC, Vice-Minister HE- Lifeng, leaded a mission of Chinese NDRC experts to Belgium and Ireland. Minister HE had the chance to meet representatives of the Operational Programme Flanders in Leuven as well as regional innovation experts from the KU Leuven and the IMEC.

Vice-Minister HE then met the Chairman of the European’s Parliament’s Urban Group MEP Jan Olbrycht. Based on his experience as former Mayor of Cieszyn in Poland, Mr Olbrycht explained the urban dimension of cohesion policy in Europe, focusing on the partnership agreements. Mr Olbrycht explained the role of the European Parliament promoting the exchange of experience and best practices between the European Union and China on the theme of territorial development. Mr HE Lifeng explained the harmonised development strategy for the Beijing-Tianjin-Hebei area as well as the “One Belt One Road” Strategy of NDRC towards developing a new Silk-Road. Both agreed on further cooperation in the issues of avoiding urban sprawl, developing adaptation strategies for shrinking cities, lowering CO2 emissions, improving urban-rural cooperation and strengthening cooperation among cities in Europe and China. 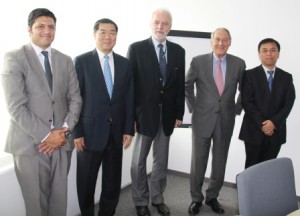 Vice Minister HE then traveled to Ireland, where he met representatives of the national and local governments. At the Ministry for Public Expenditure and Reform, Minister Brendan Howlin explained the successful story of Ireland in implementing the European Union’s cohesion policy through structural funds. While chairing the discussions during the negotiations of the 7th financial framework, Ireland made sure that cohesion policy remains at the core of the EU policy. After a meeting with then Lord Mayor of Dublin, Mr Christy Burke, the Chinese delegation visited the Digital Hub. Ms Joanne Kearney, Operations Manager of the hub, introduced the key features of the digital content and technology enterprises cluster, which is located on a state-of-the-art campus in the heart of Dublin City. Experts were able to meet the CEO of start-up Pixel Soup Philip Lynch, who introduced an award winning school software and explained the role of the hub in supporting the start-up. 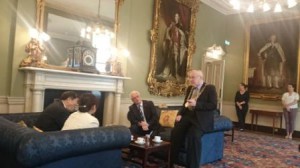 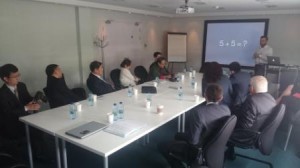 Meetings continued in the afternoon with Minister Minister Richard Bruton responsible for Enterprise and Employment. Minister Bruton and Vice-Minister HE agreed to cooperate within the framework of an Irish SME-mission to China in September 2015. They also exchanged views on outbound investments, urban development and SME promotion.

In the afternoon, Chinese delegates met Councillor Paul McAuliffe, Chair of the Economic Strategic Policy Committee, who took them to a site visit to Ballymun, a key urban renewal project in Ireland.

The first Joint Forum of European and Chinese pilot cities and regions took place on 23 June 2015 in Brussels. The activity allowed European representatives from the West Midlands, Lazio, Andalucía, Barcelona and Dublin to interact with their counterparts from Chengdu, Wuhan, Tianjin, Guangzhou and Shantou.

The forum created the basis for joint projects to be launched among the twinning cities and regions.

After the event, five Memorandums of Understandings were signed between partners from China and Europe. The signing ceremony was witnessed by EU Commissioner Corina Creţu and Mr HE Lifeng, Executive Vice-Chairman of the National Development and Reform Commission (NDRC). 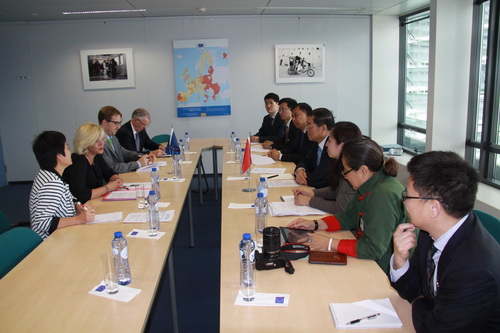 The signatories to Memoranda were as follows: