The programme of the visit to India was designed for European representatives of local and regional authorities that were accompanied by representatives of relevant business sectors. The event consisted of working visits in Chandigarh, Pune, Mumbai and Navi Mumbai.

European experts delivered lectures based on their practical experiences on sustainable urban and regional development. They also visited relevant projects in order to strengthen their cooperation within the World Cities project and develop an agenda for future collaboration.

Representatives from the European cities of Rome (Region of Lazio), Stuttgart, Copenhagen and Málaga/Sevilla (Andalucía Samrt City Cluster) debated with colleagues from Mumbai, Navi Mumbai, Pune and Chandigarh about their cooperation projects in the area of smart and green development as well as on innovation and the promotion of mutual economic exchange.

The programme started with a three-day visit to Chandigarh for all European delegates from the 4 pairing cities or city regions (Stuttgart, Copenhagen, Lazio and Andalucía). The pairing city of Chandigarh within the World Cities programme is Copenhagen, but EU representatives from Lazio and Stuttgart were also able to exchange views on their perspectives to the pilot areas of cooperation.

The visit to Chandigarh included field visits to following areas:

1. Sewage treatment. Chandigarh city has a well-planned underground network of pipes for the disposal of sewerage generated in the city. The sewerage system of the city has been designed by taking into account the natural slope of the city, which is from north to south. Chandigarh is fully covered with sewerage facility. Out of 87 MGD water being supplied to the residents of the city, 57 MGD sewage effluent is being generated. It is on the way of becoming the only city in India with 100% sewage treatment in the near future. 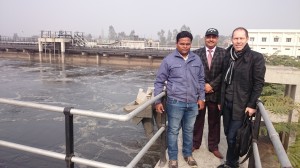 2. Energy Efficiency. Chandigarh Solar City. A “solar city” is an urban area that aims to: a) reduce dependence on fossil fuels for its energy needs, and b) limit emission levels to sustainable levels even while maintaining the desired socio-economic development growth. Delegates were able to visit a solar photovoltaic power generation facility in the roof top at Chandigarh University.

3. Mobility and Smart City: The visit will include the Capital Complex (applying for UNESCO world heritage status) and many projects in that area. Chandigarh Administration has promoted the use of battery operated vehicles by providing subsidies. A multilevel parking at the centre of the city has been at the verge of completion to promote vehicular free zones and control over vehicular density on the roads. Chandigarh is strictly following the smoke free city concept and practicing on the spot challans for the offenders. A concept of Metro transport has been approved for the city to promote public transport and control the vehicular air emissions. The construction of new and connecting the available inter-sector bicycle tracks is proposed to promote emission free, and healthy environment. 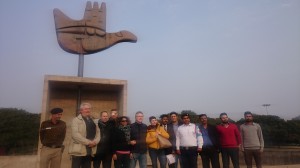 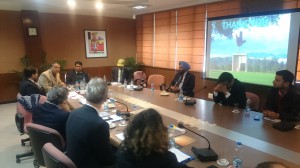 The visit to Chandigarh was widely covered by the press.

After meetings in Chandigarh, delegates travelled to will travel to Mumbai, the capital city of the Indian state of Maharashtra. Mumbai is the most populous city in India and the eighth most populous city in the world, with an estimated city population of 18.4 million. The pairing city for Mumbai within the World Cities project is Stuttgart, one of the key engines of European economic and green development. 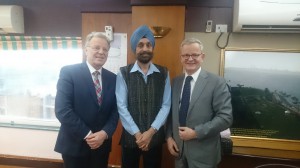 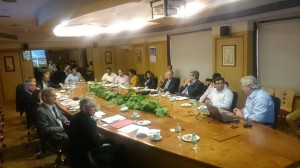 Delegates from Lazio also visited their pairing city of Navi Mumbai, developed in 1972 as a new urban township of Mumbai. The population of Navi Mumbai has reached more than 1 million inhabitants. It is one of the world’s largest planned new cities that was conceived as a satellite city to relief the strain on Mumbai. The City and Industrial Planning Corporation of Maharashtra (CIDCO) is responsible for both its planning and implementation. To minimise travel distances the city is developed on nodal patterns, similar to the suburbs of Mumbai.

The programme ended end with a conference of the World Cities project that took place in cooperation with the Stuttgart-Meets-Mumbai event.