The bilateral missions to Chandigarh, Navi Mumbai, Pune and Mumbai focused on the pilot projects that had been identified so far. The programmes were developed in cooperation with the institutions involved in the city pairings. After the bilateral working missions, delegates participated at a project conference in Mumbai. 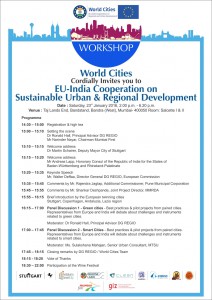 Representatives from the European cities of Rome, Stuttgart, Copenhagen and Andalucía Smart City Cluster debated with colleagues from Mumbai, Navi Mumbai, Pune and Chandigarh about their cooperation projects in the area of smart and green development. 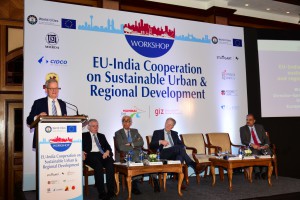 During the conference, experts agreed that India and EU cities have to focus their future urban development on strengthening attractiveness by putting people at the centre of any smart city development. According to the Director General of the EU Commission’s DG REGIO, Dr Walter Deffaa, “The EU model is well suited for India’s structure because the relationship between the EU and its Member States is in many ways similar to that between the Indian Government and the Indian states. The frameworks are being established at the European level, but the implementation is done by each Member State in the way that best suit their individual situation”.

Dr Deffaa stated that the European Union can facilitate the involvement of all the European companies who are well-known for their technological strength. And also on the policy level Europe has a lot to contribute to the Indian urbanisation process. He also mentioned that the World Cities project will followed from mid-2016 by a larger programme on��International Urban Cooperation, a platform to bring together city/regional stakeholders including the private sector from the EU and India to exchange experience and know-how. 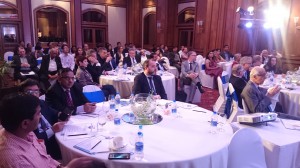 The conference was attended by around 100 participants from the pilot European and Indian cities as well as by representatives from public administration, the business and research communities from Mumbai. The conference took place in cooperation with the Stuttgart meets Mumbai event. 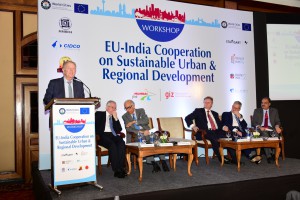 Dr Martin Schairer, Deputy Mayor City of Stuttgart, mentioned that his city – an industrial hub in Europe – is doing great efforts to become carbon neutral by 2050. He also pointed out that talks conducted with several institutions in Mumbai during the last few days have further strengthened concrete cooperation projects between both cities. He also expressed his gratitude to the Indian Honorary Consul in Stuttgart Mr Andreas Lapp for inviting Stuttgart and the EU World Cities project to participate at the Stuttgart-meets-Mumbai event held on 22 and 23 January 2016 in Mumbai. 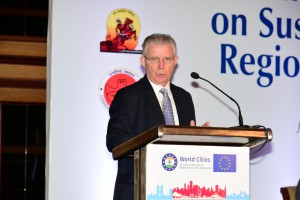 Dr Ronald Hall, Principal Advisor for International Relations at DG REGIO, mentioned that the project has provided Indian and European participants with valuable first-hand experience in regional development and sustainable urban development issues in both regions. It has also set the scene for sustainable future cooperation. Concrete projects have been introduced in the areas of non-motorised transportation, sewage treatment, waste management, smart cities development, environmental protection and climate change mitigation / adaptation. The World Cities project represents a significant contribution to the ‘Mumbai Partnership’– which was established between the European Union (EU), Mumbai First, government agencies and other stakeholders in order to address the challenges of urbanisation in Mumbai. 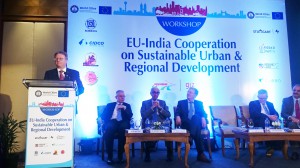 The Honorary Consul of India in Stuttgart Mr Andreas Lapp mentioned that low-carbon development has a high priority for Mumbai and Stuttgart. The new headquarters of Lapp Group in Stuttgart are designed to be carbon neutral by 2016. He also expressed that the Mumbai-Stuttgart cooperation within the World Cities project complements the bilateral partnership existing since 1968.

Mr. N. Nayar, Chairman of Mumbai First, expressed his deep appreciation for the excellent co-operation from the EU and mentioned that “We are committed to continue working with the European Union in new initiatives which will contribute to addressing Mumbai’s urban and environmental challenges”. 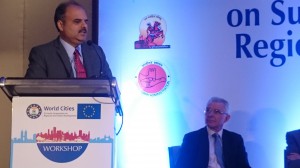 Shri. S. C. Deshpande, Joint Town Planning Director at MMRDA expressed that his institution is working on the elaboration of several master plans for the metropolitan area of Mumbai and invited European experts from private and public sector to get more involved in this process. He referred to several pilot projects like the smart city development of BKC Mumbai, the reduction of CO2 emissions by 30% and energy efficient street lightning. 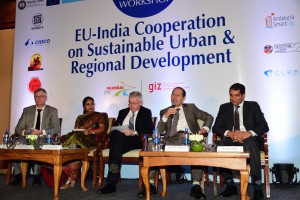 During the panel discussion on green city development, participants exchanged views regarding low carbon development and renewable energies. The head of Stuttgart Environmental Department, Dr Hans-Wolf Zirkwitz, mentioned that his city reached a pic renewables share of 83% in August 2015. He also focused on the role of pubic awareness measures to communicate to citizens the positive results of green city development. Mr Soren Hanson from the engineering company Ramboll referred to importance of a long term strategy for larger environmental and urban development projects. He stated that the city of Copenhagen has made huge efforts to attract private investment in green development projects. Ms Uttama Fulzele from MMRDA gave some examples of environmental investments planned by her institution in the coming years. The city of Chandigarh was represented at the meeting by Mr Singh, who explained the progress of the pilot projects identified in the bilateral cooperation with Copenhagen in the areas of sewage and waste management as well as in non-motorised transportation.

During the panel discussion on the smart city, Mr Riccardo Marini from Gehl Architects stated that successful urban development projects focus on the people, rather than on high-end technologies. He also recognised the efforts made by the city of Chandigarh in involving its citizens in deliberations on urban development and emphasised that smart city is about people and for people.  The director of urban planning at Stuttgart city, Dr Detlef Kron, explained the city efforts on sustainable urban mobility and the integrated traffic management system. Stuttgart is making considerable efforts in retrofitting building stock from the 1950s and 1960s  in order to cope with the CO2 emissions’ reduction goals.  Ms Geetha Pillai from CIDCO in Navi Mumbai mentioned is currently constructing more than 30 km of exclusive cycling roads in order to promote non-motorised transportation. Mr Daniel González from Andalucía Smart City cluster focused on the well-being of citizens through concrete smart city initiatives and mentioned some best practices on future urban transportation from Málaga  (ZEM2ALL and VICTORIA). Ms Rachele Nocera from ENEA Italy explained some smart-city projects in Rome to protect critical infrastructure as well as to improve energy efficiency in public lightning.  ��������